New information from the economic study of golf in Spain 2020

According to a study carried out by IE University in cooperation with the Spanish Association of Golf Courses (AECG) and the Royal Spanish Golf Federation (RFEG), golf tourism in Spain attracts 1.2 million foreign tourists – almost all of them European – and has consolidated itself as the main destination for the practice of this sport. This tourist sector contributes 12,769 million Euros (both direct and indirect) which is of great value because it helps to deseasonalise, as it is produced mainly in the months of March-April and October-November.

The study presented last October 15th, reflects the role that the golf sector can play in the reactivation phase of the economy after the great coronavirus pandemic, since seven out of every eight euros (88%) produced are derived from the external activity to the golf courses, with consequences in other segments such as services.

Seven out of every eight euros produced are generated outside the golf courses, affecting sectors such as services. 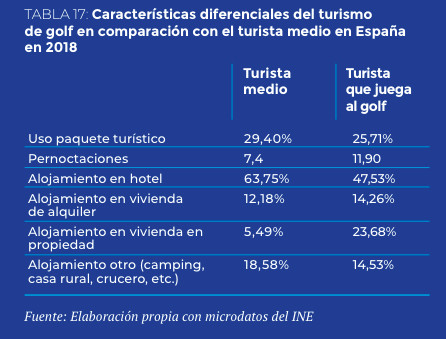 The immediate expenditure of golf tourists is 4,640 million euros: The United Kingdom accounts for 1,145 million euros, while Sweden (779.3 million), with tourists from Ireland and Norway spending the most with an average of: 6,014 euros and 5,214 euros. These data are obtained thanks to an agreement with Mastercard to collect data on the consumption of credit cards of international tourists who travel to Spain.

The direct expenses of the golf tourist are 4,640 million euros, with the United Kingdom contributing 1,145 million.

Regardless of the visitor’s nationality, the most important direct expenditure on tourism is in the branch of hotels, food and drinks, which represents a minimum of 31% of expenditure for tourists from the Netherlands and a maximum of 59% for those from the United Kingdom.

Average annual expenditure in Spain of foreign tourists who play golf by nationality, according to Mastercard data.

25.71% of golf tourists book package tours; 47.53% stay in hotels and 23.68% in holiday homes, compared to only 5.49% of the average Spanish tourists. This figure would then become a volume of 283,000 units with a financial real estate investment of 41,937 million Euros. IE University adds that this bet «is directly associated with the annual recurrent expenditure in Spain, since the majority comes at least once a year and 21.49% each quarter».

Golf and the evolution of cities

Gonzaga Escauriaza, president of the RFEG (the Royal Spanish Golf Federation), pointed out that the golf tourist «has changed many places in our country», because he contributes to the de-seasonalization and favors new investments.

The average stay is 11.9 days, they spend 324 euros per day, so the average expenditure for each stay is more than 3,850 euros.

The main periods of golf tourism are March-April and October-November, while Spanish tourism is concentrated in the months of July and August. «This means that in the months of low tourism, such as February and March, the expenditure of tourists who play golf can represent up to 3% of the total tourist expenditure in Spain,» states the report.

Another notable feature is that tourists who play golf have a greater probability of travelling to Spain every month (5.76% compared to 2.65%) and are much more likely to travel to Spain once a quarter and once a semester.

The report on the economic impact of golf in Spain has been prepared by IE University as a result of a survey of golf course management companies in Spain. Carried out by the AECG and the REFG. The data has been collected from Mastercard which records the purchasing behaviour of international visitors in Spain before and after their visit, as well as microeconomic data from the Tourist Expenditure Survey of the National Institute of Statistics.